ACCJH scholarship recipients and board member featured in the New York Times for their work with the Transitions Clinic Network: "They’re Out of Prison. Can They Stay Out of the Hospital?" 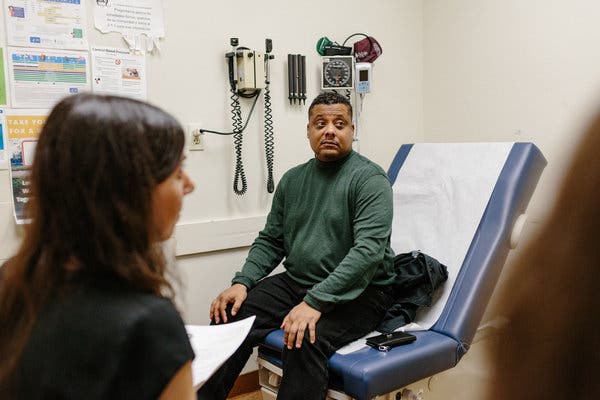 Cezar, a recent parolee who had a heart attack while in prison, during a check-up with Dr. Shira Shavit at the Southeast Medical Center Clinic in San Francisco.CreditJason Henry for The New York Times
May 29, 2018

SAN FRANCISCO — The night Ronald Sanders turned his life around, he had been smoking crack for two days in a tiny, airless room. His infant son, Isaiah, was breathing in the fumes. “His chest was beating really hard,” Mr. Sanders recalled. “So I pray: ‘If my son makes it through the night, that’s it.’”

Mr. Sanders quit using drugs and stopped cycling in and out of prison more than two decades ago. He is now a community health worker who helps people getting out of prison deal with a host of medical, psychiatric and substance abuse disorders.

As the country tries to shrink its aging prison population, the inmates being released after years locked away often have mental illnesses and addictions that can land them back in prison if untreated. Mr. Sanders and other former prisoners are central players in an approach to helping these men and women that is expanding in California and North Carolina, among other states. By year’s end, Los Angeles County plans to have hired 220 such workers to help released inmates navigate life outside.

“We’ve always known incarceration is bad for health,” said Leah G. Pope, director of the substance use and mental health program at the Vera Institute of Justice, a research and advocacy group. “But in an age of increasing attention to justice reform and health care reform, the two are increasingly connected.”

Source Link:
They’re Out of Prison. Can They Stay Out of the Hospital?

ACCJH is made possible by a collaboration with